Under the Dome of Pollution 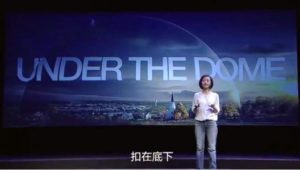 The documentary-style film produced by a Chinese investigative journalist and environmental activist, Chai Jing, has been viewed over 300 million times since its release last Saturday. Being hailed as the Chinese “An Inconvenient Truth,” the film has been an eye-opener for the Chinese public regarding the real environmental cost of China’s economic boom.

In the 104-minute film, Chai offers a look at the real environmental cost that China’s 30 years of breakneck economic development has produced. Since its release, Under the Dome has been compared to Al Gore’s “An Inconvenient Truth” and Rachel Carson’s “Silent Spring” since it has created a movement of widespread social reflection for the growing air pollution problem in China.

However, the majority of Chinese people simply complain about the air pollution problem upon occasion without doing anything about it. The film suggests that the Chinese public has not had the time or the inclination to really reflect deeply on the causes of the smog polluting the environment. They have simply come to accept air pollution as a fact of life.

Chai’s film has become a mirror of inner reflection in which everyone can see himself or herself. The dome effect that Chai describes she feels her family lives under due to air pollution, has sparked a wide range of public discussion ranging from environmental protection regulation, energy reform, to science communication and even humanity.

It is worth noting that Chai herself states that her motivations for making the film were completely personal ones, at first. She apparently paid “little attention” to the ubiquitous smog in her city, confusing it for simply fog—that is, until she got pregnant.

Chai’s reasoning behind the making of this documentary about air pollution seems to reflect common human behavior—the way people generally are. It is not until something starts affecting us directly, that we really being to care. Part of the issue that Under the Dome raises about air pollution is that it is perceived as an issue that happens to someone else. We perceive environmental issues and climate change as problems that are affecting someone else, happening in the future, occurring in a different place.

Although the film has sparked a critical movement for China’s government to deal with the environmental challenges regarding the ubiquitous air pollution problem, the film shows that a bigger fight has been won. Although the film has now been banned in China, the film’s relative boldness on a potentially controversial subject reached more than 300 million views before it was banned.

Rather than having been ignored, the documentary actually gained the praise of some higher-ups in the Chinese government. China’s new environmental minister even commented on it noting that the film highlights the “growing public concern over environmental protection and threats to human health” that the air pollution problem creates.

As the Chinese economy begins to slow down, the biggest challenge to President Xi Jinping’s governance will be in maintaining economic development. Part of Xi’s new legislation intends to reduce the reliance on the traditional economies that created the air pollution problem and replace them with new green economies. Although it cannot be said the extent to which Under the Dome might influence Chinese environmental protection policies in the future, it has already influenced public opinion on the matter. Speeches by President Xi Jinping (as stated above) are noteworthy however, and may reflect the growing sentiment across China, that sustainability may actually be as important as economic growth. 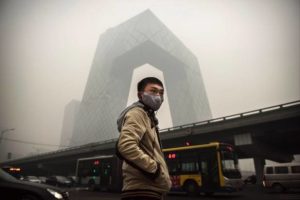 Under the Dome is a clear indication that much like its economic reality, China’s political environment is changing in an unprecedented pace. Despite the film being highly critical of the Chinese Communist Party’s (CCP) environmental regulations, the film was not blocked from popular Chinese websites until 6 days after its release.

There is no doubt that Under the Dome has tested the boundaries of freedom of speech and public opinion in China. The phenomenal response and in-depth discussions that the documentary has sparked has loosened the control the CCP’ has over ideology and public opinion. As a result of Under the Dome, it is likely that more opinion leaders like Chai will lead and dominate public opinion in China in a matter of time. Today people in China are talking about the environment; perhaps tomorrow they may talk about democracy. It is just a matter of time before the Chinese people begin to demand freedom of speech.