Democracy is important. The National Endowment for Democracy acts as an umbrella group for non-governmental groups across the world.

The National Endowment for Democracy (NED) is a private, non-profit foundation dedicated to the growth and strengthening of democratic institutions around the world. Each year, NED makes more than 1,200 grants to support the projects of non-governmental groups abroad who are working for democratic goals in more than 90 countries. 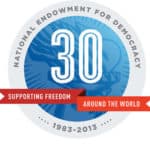 Democracy belongs to no single nation, but rather it is the birthright of every person in every nation. That’s why the National Endowment for Democracy works in all corners of the globe, supporting democracy activists on six continents and in 90 countries.

Our work abroad takes the form of grants to local, independent organizations promoting political and economic freedom, a strong civil society, independent media, human rights, and the rule of law. Some of these organizations operate in transitional countries where the goal is consolidating democratic gains, while some operate in authoritarian countries where the goals are liberalization and the protection of human rights.

While NED’s work around the world is guided by the belief that freedom is a universal human aspiration, we know that democracy cannot be achieved through a single election and need not be based upon the model of the United States or any other particular country. Rather, democracy evolves according to the needs and traditions of diverse political cultures. NED helps strengthen the bond between indigenous democratic movements abroad and the people of the United States – a bond based on a common commitment to representative government and freedom as a way of life.