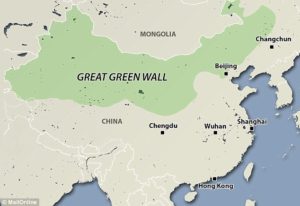 You’ve probably heard of the Great Wall of China, but have you heard about China’s Great Green Wall?

Unlike the Great Wall of China, a 5000-mile fortification that separates northern China from the Mongolian steppe, the Great Green Wall of China is the biggest tree planting reforestation project in the planet. This massive 4500 kilometer-long belt of trees was planned to hold back the quickly expanding Gobi desert.

The Great Green Wall is the largest ecological engineering project in the planet and is meant to keep China’s deserts from expanding and to sequester millions of tons of carbon dioxide.

The Gobi and Taklamakan deserts of northern China are the largest dust bowls in Asia. The sand storms created by these deserts are so strong that dust regularly shrouds Beijing in dust. This dust can also fall as far away to reach Greenland.

The Green Wall project was conceived in 1978 in an effort to combat deforestation in the country’s arid northwest rim. Soon after, China passed a legislation that required all citizens over the age of 11 to plant at least three Poplar, Eucalyptus, Larch, and other saplings every year. This massive project has been planned to be due for completion in 2050. At this point, the Great Green Wall will contain more than 100 billion trees.

Despite some of the criticism that the Great Green Wall of China has garnered, there is no doubt that the tree belt is sucking up carbon dioxide. And it is very likely that without these trees, climate change would be moving a little bit faster.

According to Yi Liu, remote sensing scientist from the Centre of Excellence for Climate System Science at the University of New South Wales in Australia, “The tree planting projects can help absorb some carbon from the atmosphere, but it is really a small number in comparison to carbon emissions.”

Despite the progress that the Great Green Wall of China has made in reducing carbon dioxide and helping slow down the expansion of China’s deserts, the environmental situation in China is getting worse.

According to analysts, China is losing is losing as many kilometers of grassland and farms to desertification each year. China’s reforestation efforts have proved to be helpful, but in an uphill battle against deforestation.

However, despite the Great Green Wall’s effectiveness in battling deforestation, there is no doubt that it is certainly helping in reducing the amount of green house gases that make their way into the atmosphere.

Regardless of the debates surrounding China’s Great Green Wall, the Chinese government is regarding the Great Green Wall as a key weapon in its arsenal to fight global warming as proof to the world that China is taking strong steps to mitigate global carbon emissions.

If you want to read more about China’s environmental situation, make sure you read our other article about Chai Jing’s documentary about China’s air pollution.